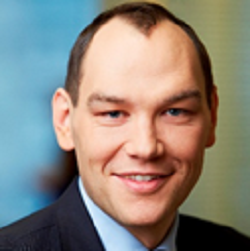 Wojciech Sadowski, PhD is a partner at K&L Gates. He is a Polish qualified adwokat, in the process of registrating in the UK as a Registered European Lawyer. He has over 15 years professional experience with international dispute settlement, with a particular focus on international arbitration, EU law and judicial co-operation in civil and commercial matters. His credentials include acting as counsel and sitting as arbitrator in M&A related disputes.

Since 2008, he has constantly been ranked by leading legal directories, including Chambers and Partners, Legal 500, Best Lawyers and Who’s Who International Arbitration, as one of the recommended practitioners in the area of dispute resolution and international arbitration.

He has acted as counsel in numerous cases before Polish courts, international and domestic arbitral tribunals, European Court of Human Rights, General Court of the EU and the Court of Justice of the European Union.

Until 2013 he was a researcher and following this, assistant professor at the Institute of Legal Studies of the Polish Academy of Science, where in 2009 he defended the PhD thesis on the application of the res iudicata principle in investment treaty arbitration.

He is an author of many books, papers and articles, on various topics related to international arbitration, investment treaty law, EU law and international commercial disputes.