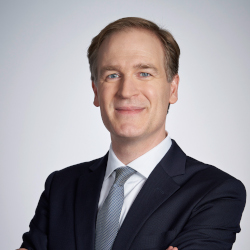 James Menz is a founding partner of rothorn legal. His practice focuses on complex disputes in the construction, engineering, energy, transportation, pharmaceutical, and biotechnology sectors. He has acted as counsel, arbitrator, and arbitral secretary in dozens of proceedings under a variety of applicable institutional rules and substantive laws.

A U.S.-trained attorney with extensive experience in civil and common law settings, James brings a 360-degree view to cross-border disputes. As senior litigation expert at Bombardier Transportation, he has managed a range of domestic and international litigations and arbitrations and has advised the business on dispute avoidance and resolution strategies. From 2016-2018, James was Deputy Secretary General and Head of Case Management at the German Arbitration Institute (DIS), where he supervised hundreds of arbitration and ADR proceedings, represented the institute, and served on the drafting committee for the revised 2018 DIS Arbitration Rules. Previously, for over ten years James practiced international arbitration, litigation, and competition law with major law firms in New York and Zurich.

James is a board member of the Swiss Arbitration Association (ASA), an advisory board member of the Online magazine “Dispute Resolution,” and helped launch the German Association of Company Lawyers’ (BUJ) Dispute Resolution Group. He regularly speaks at conferences and lectures at universities and seminars on issues in international commercial arbitration. He has been repeatedly listed in Who’s Who Legal’s “Future Leaders” edition, including among the top-10 non-partners in Europe (2018).